One of the ways to play-and-win on "The NEW Saturday Morning Stateline Show"  is called The "BIG # OF THE WEEK" game.
This week the # was 200,000 & the possible topics were: Blaster / Bling / Boss

And the answer this week...

And here is why...
Possibly the most exciting science fiction weapon ever is up for auction -- and if you have at least $200,000 it can be yours. 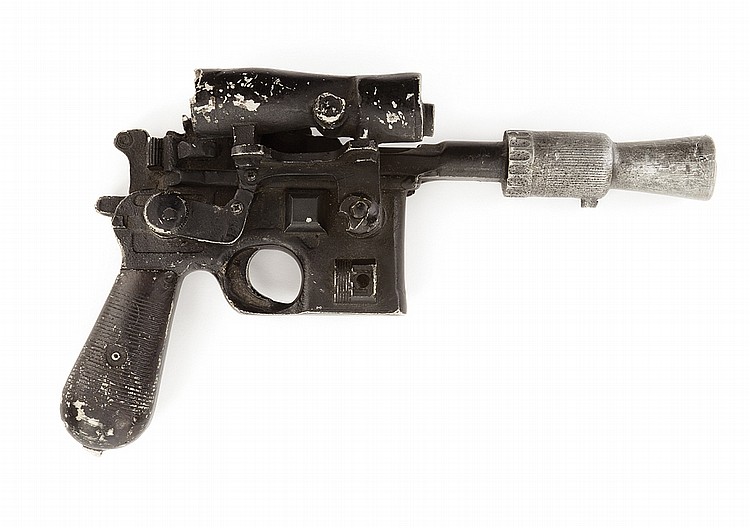 Harrison Ford's "Han Solo" DL-44 Blaster from Star Wars: The Empire Strikes Back & Return of the Jedi is available for sale.

"blaster is exactly in its original filming condition and therefore exhibits wear from use, but retains all of the original details."

Now, while most STAR WARS fans would love to get an actual "Light Saber" (which would be crazy-cool), I myself would prefer this. I mean how cool would it be to shoot BURSTS of deadly light at your enemies?

The auction site describes the offering in detail. Here is some of their info:

Harrison Ford’s charismatic smuggler, Han Solo, is arguably the most popular character in the original Star Wars trilogy. The space-scoundrel-turned hero’s persona is irrevocably tied to his blaster pistol.
This non-firing blaster was created for The Empire Strikes Back and was also used in Return of the Jedi. It would have been used in the majority of scenes that feature Han, with the heavier, live-fire weapon being used for close-up shots. Based on the German issue Mauser C96 pistol, this piece, measuring 11 in. long, was custom made for the film from resin by casting the original hero prop from the first Star Wars: A New Hope, it therefore exhibits the same serial number as the hero prop, which is thought to no longer exist. To our knowledge this is the only known example of this type of blaster in private hands. This is a truly incredible item of motion picture history and quite possibly the most exciting science fiction weapon to have been offered for public auction.

The "weapon" even comes with a letter of authenticity from a noted Star Wars collector.

Categories: Articles
Comments
Leave A Comment
Back To Top
1440 WROK Is Rockford's New Home For The Chicago White Sox